How to cite this article

Total rhinectomy defects pose a challenge for the reconstructive surgeon, but since the introduction of osseointegrated implants, maxillofacial implant–retained prosthetic rehabilitation has provided the patient with an alternative option that has an excellent cosmetic result. Traditionally, zygomatic implants are used for prosthodontic restoration in patients with severely atrophic maxilla or to retain an obturator after tumor ablative surgery. More recently, the nonconventional use of zygomatic implants for retention of a nasal prosthesis has been reported in cases involving rhinectomy defects where the length of conventional dental implants is a limiting factor. In this article, we describe the use and value of transversely-oriented zygomatic implants in combination with an acrylic keeper and maxillary denture to optimize retention of a complex, multi-unit prosthesis in an edentulous patient with a total rhinectomy and upper lip defect.

The use and value of osseointegrated implants for extraoral prosthetic rehabilitation has been increasingly advocated in the literature for maxillofacial defects.1–4 In cases of extensive atrophy or loss of the maxillary bone due to ablative surgery, the use of zygomatic implants alone or with conventional dental implants provide retention for an intraoral prosthesis.5,6

In these instances, the zygomatic implants are typically oriented obliquely, to engage the zygomatic and palatal bone, with the fixture mount surface projecting into the oral cavity. Their use for retention of nasal prosthesis following rhinectomy, where the bony components of the piriform aperture are not present or insufficient for conventional implant placement, has also been reported.7–9

To date however, combined facial/intraoral prostheses supported by horizontally-oriented zygomatic implants have not been reported in the literature. Here, we present an edentulous patient with an extensive rhinectomy that was restored with a nasal prosthesis retained by magnetic retention by zygomatic implants and a denture using an acrylic keeper.

A 72-year-old man was referred for treatment of recurrent basal cell carcinoma (BCC) of the right nasolabial fold. He had previously undergone multiple wide local excisions with local flap reconstruction for a primary and recurrent BCC of the right nasal ala that ultimately resulted in a defect comprising the majority of the nasal complex, bilateral nasal cavity, and left medial canthus along with the lacrimal system. Due to the aggressive nature of the disease, the patient was discussed at the multidisciplinary tumor board where it was agreed that the best option for cure included total rhinectomy, infrastructure maxillectomy, and excision of the involved upper lip. Due the extent of the anticipated defect and the need for adjuvant radiotherapy, osseointegrated implant – retained maxillofacial prosthesis was felt to represent the best reconstructive option for the patient. 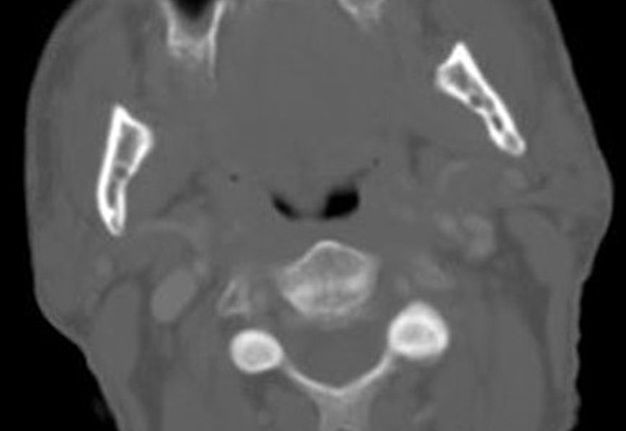 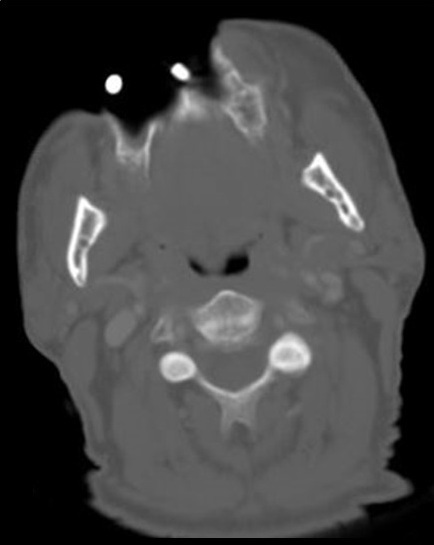 FIGURE 1A. Serial computed tomography (CT) imaging (axial view) of zygomatic implants. Where A is the most caudal CT scan and F is the most cranial one. 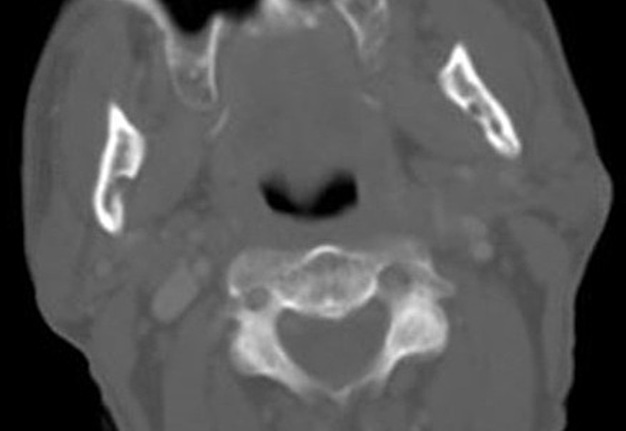 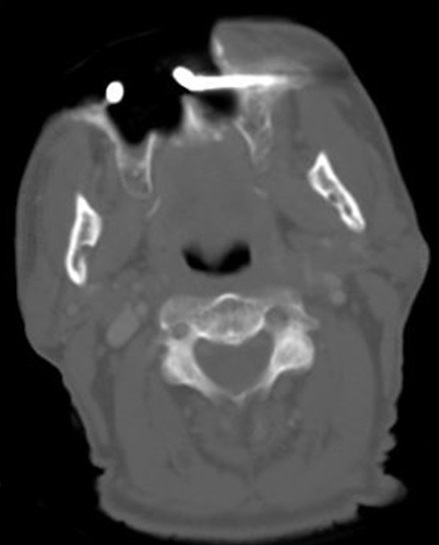 FIGURE 1B. Serial computed tomography (CT) imaging (axial view) of zygomatic implants. Where A is the most caudal CT scan and F is the most cranial one. 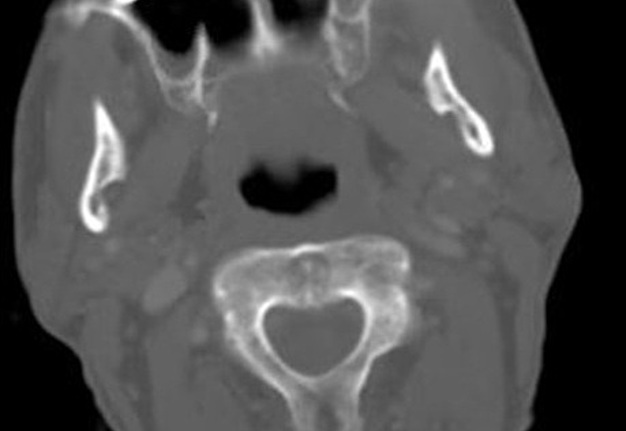 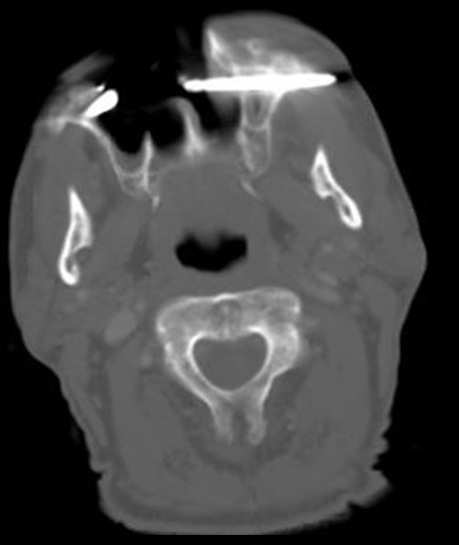 FIGURE 1C. Serial computed tomography (CT) imaging (axial view) of zygomatic implants. Where A is the most caudal CT scan and F is the most cranial one. 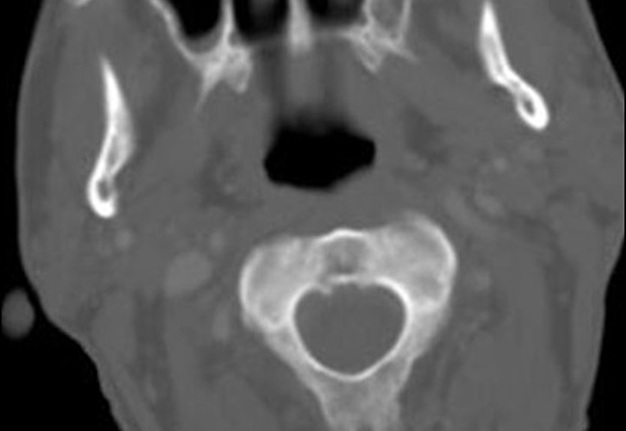 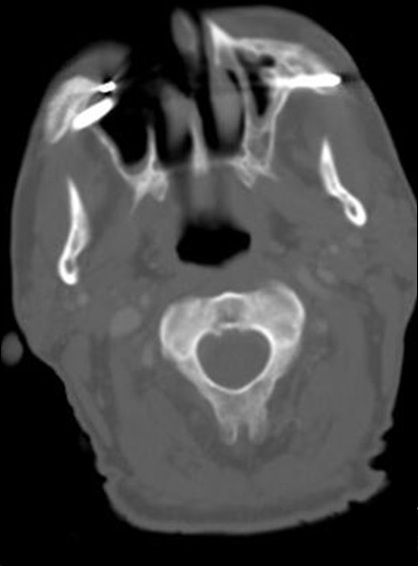 FIGURE 1D. Serial computed tomography (CT) imaging (axial view) of zygomatic implants. Where A is the most caudal CT scan and F is the most
cranial one. 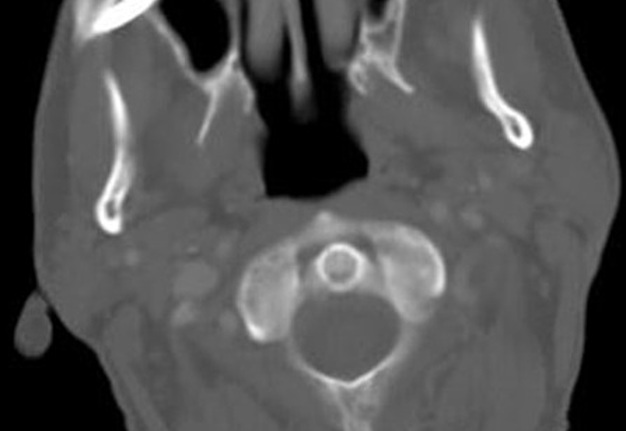 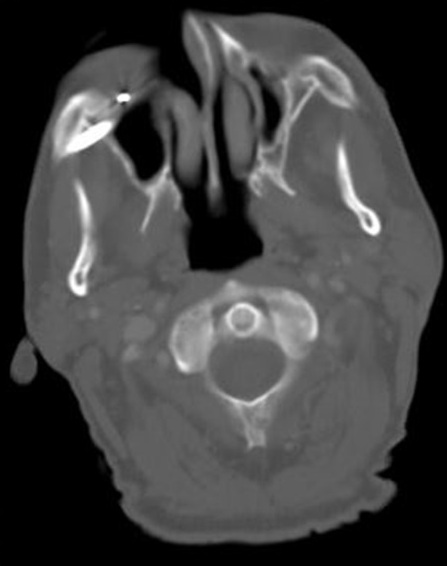 FIGURE 1E. Serial computed tomography (CT) imaging (axial view) of zygomatic implants. Where A is the most caudal CT scan and F is the most
cranial one. 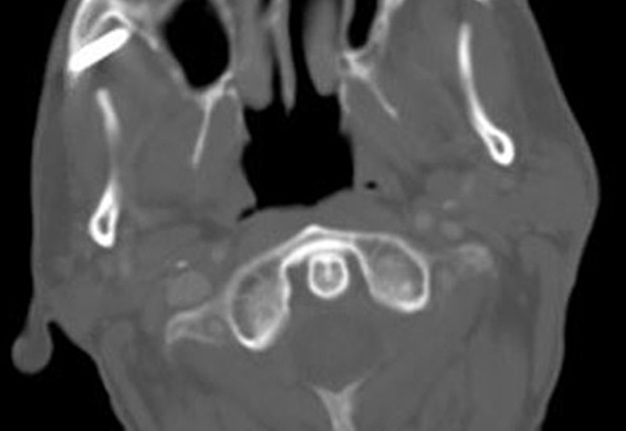 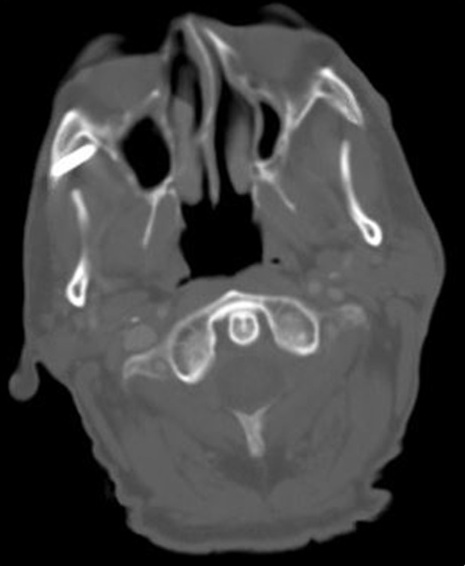 FIGURE 1F. Serial computed tomography (CT) imaging (axial view) of zygomatic implants. Where A is the most caudal CT scan and F is the most cranial one.

The patient then underwent 60 Gy of adjuvant radiotherapy in 30 fractions without complication.

At the initiation of the prosthetic phase of treatment, the defect site was well-healed, and the zygomatic implants were stable without evidence of mobility. The key component that optimized the retention of the nasal prosthesis was the fabrication of an acrylic keeper that was incorporated with two magnets to match the nasal prosthesis and upper denture (Figs 2 and 3). 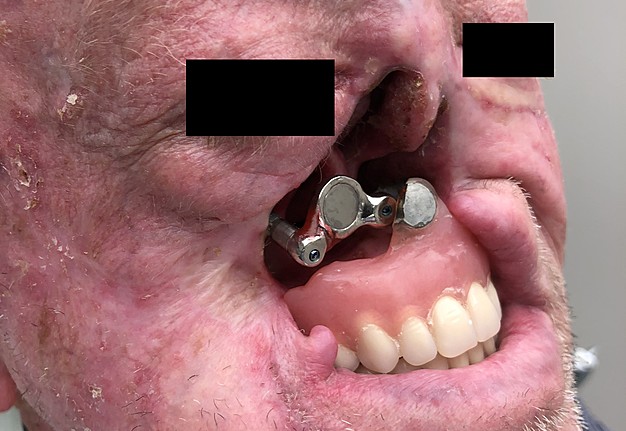 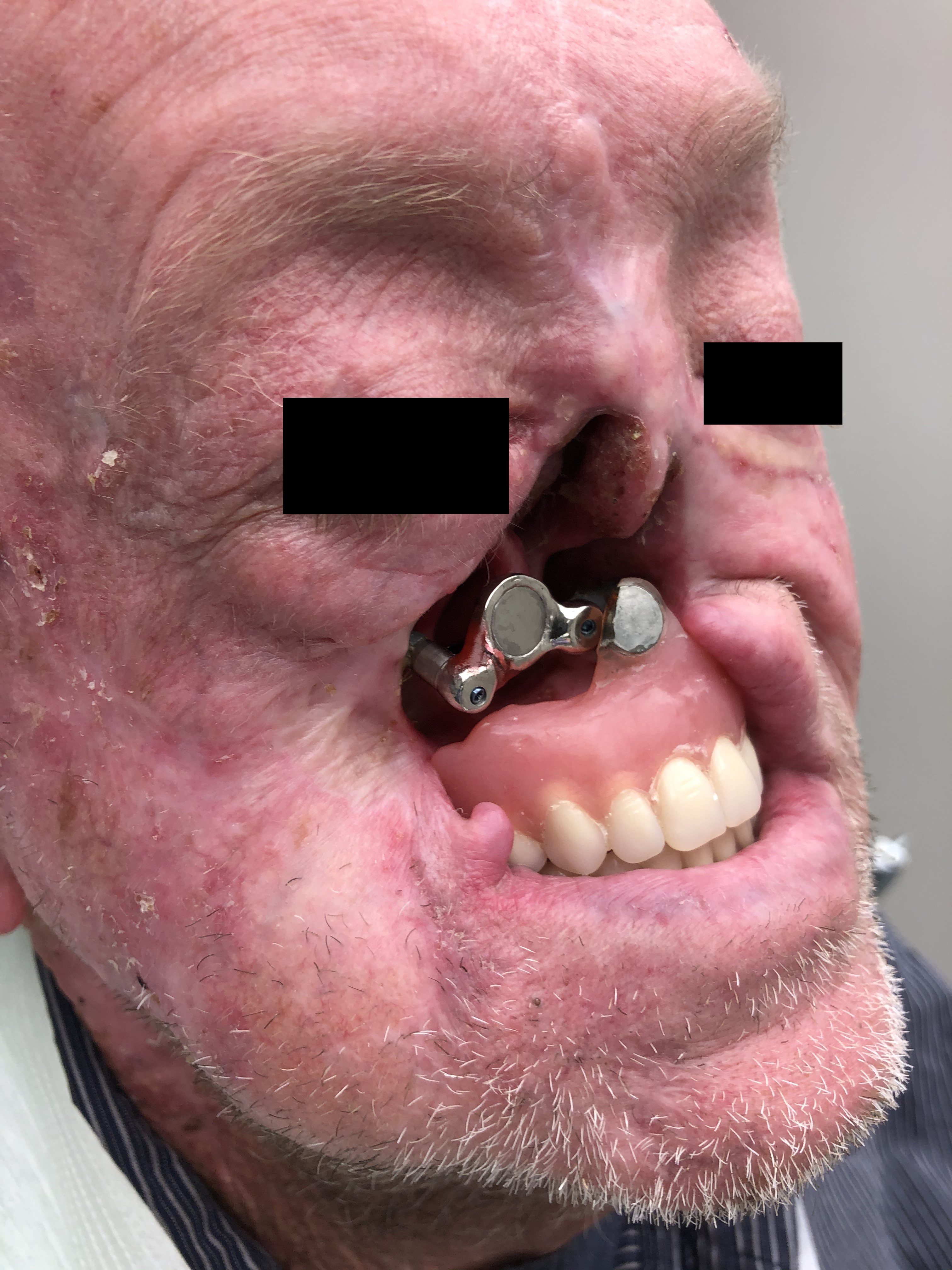 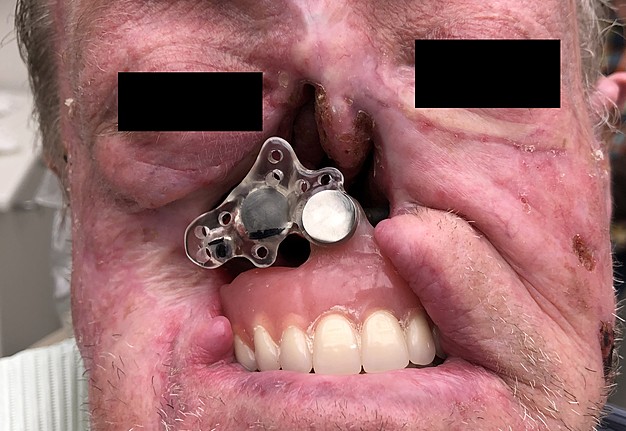 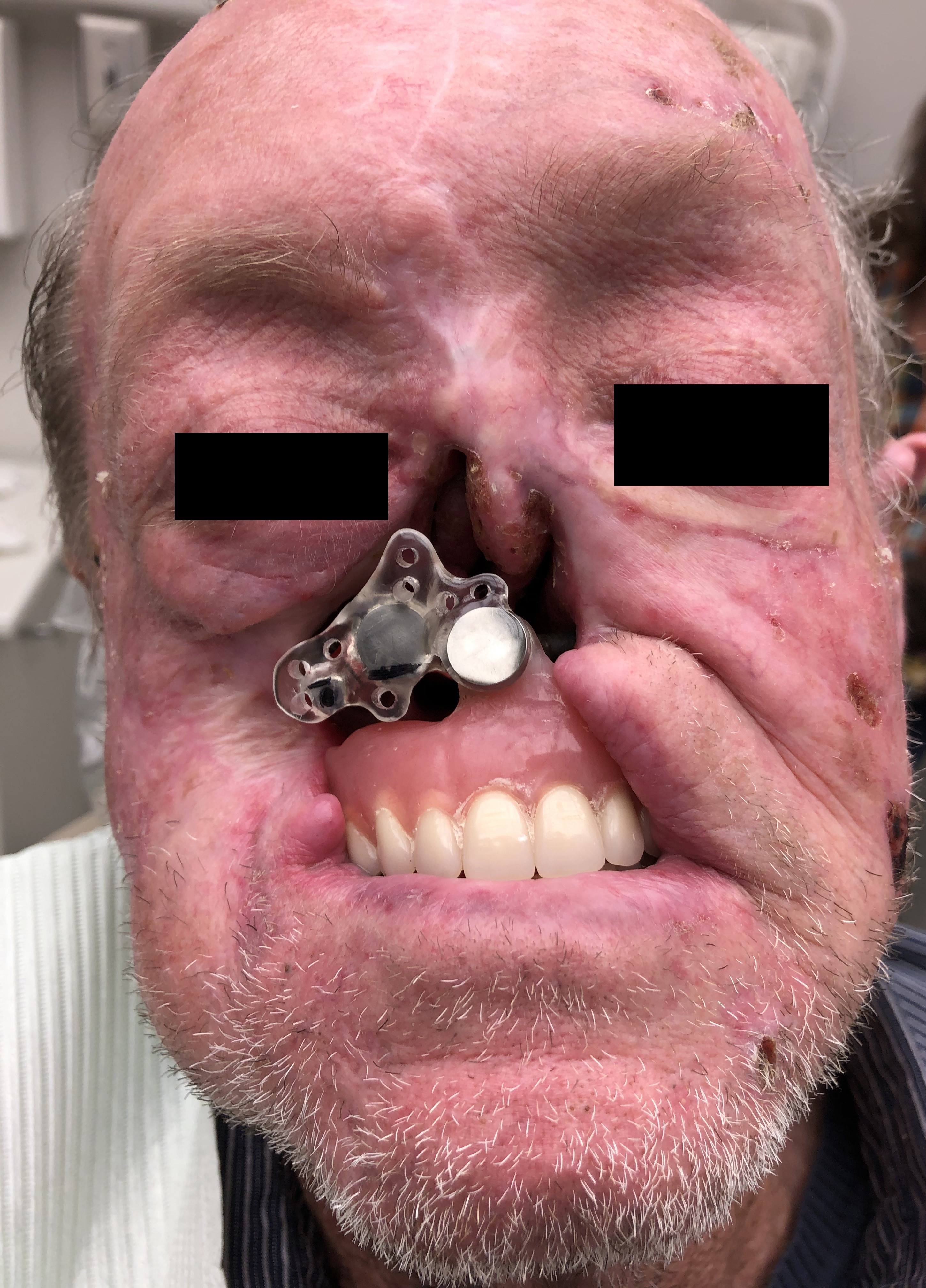 Fifteen months after the completion of radiotherapy, the patient remained free of disease and the nasal prosthesis along with the dentures was in function, with an excellent cosmetic outcome and no evidence of implant or prosthetic failure (Figs 4–6). 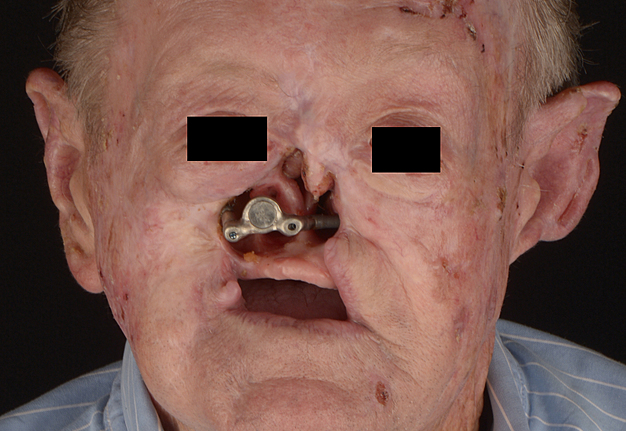 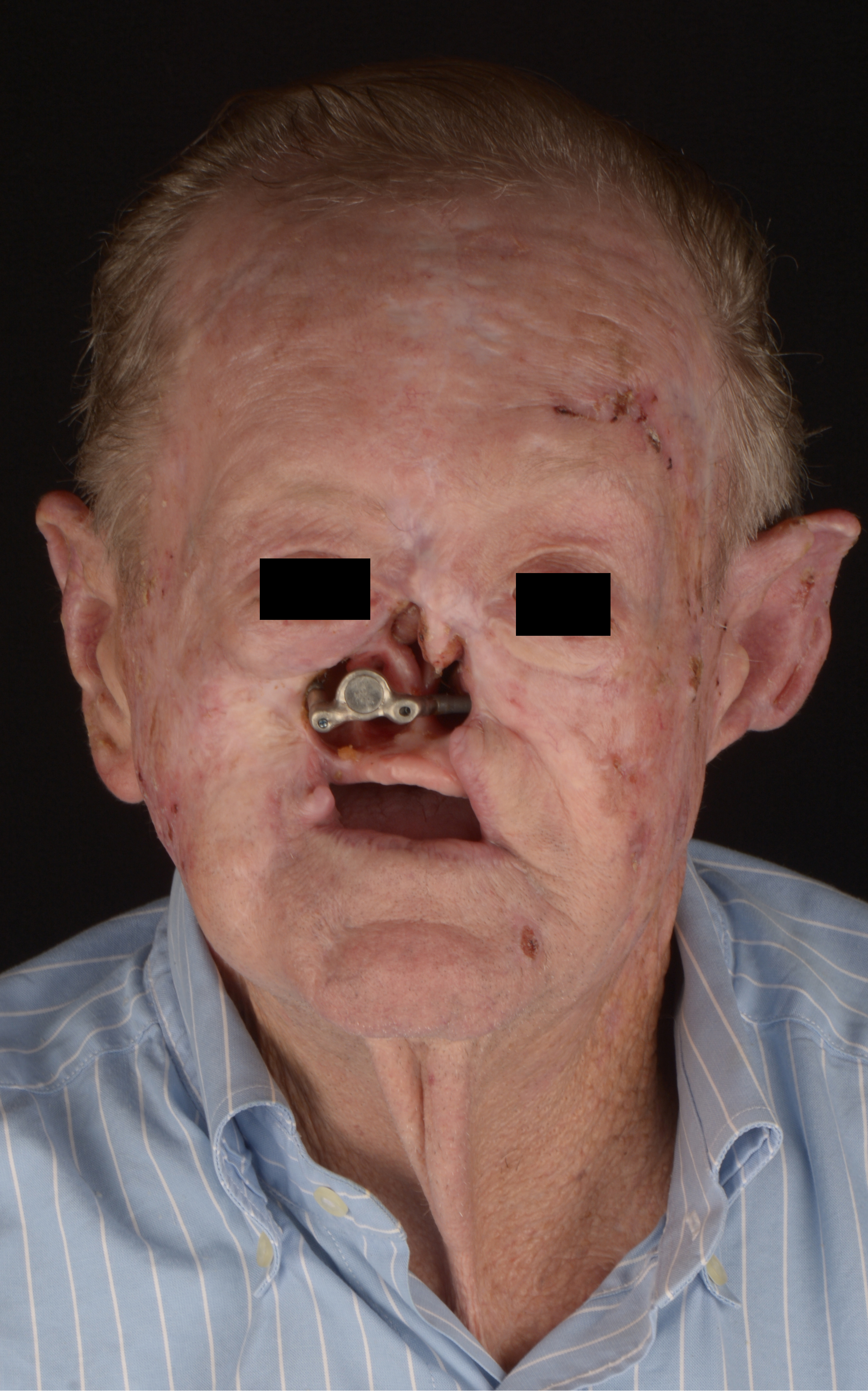 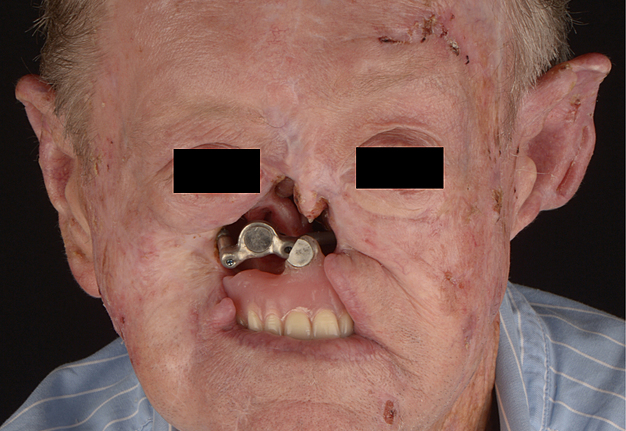 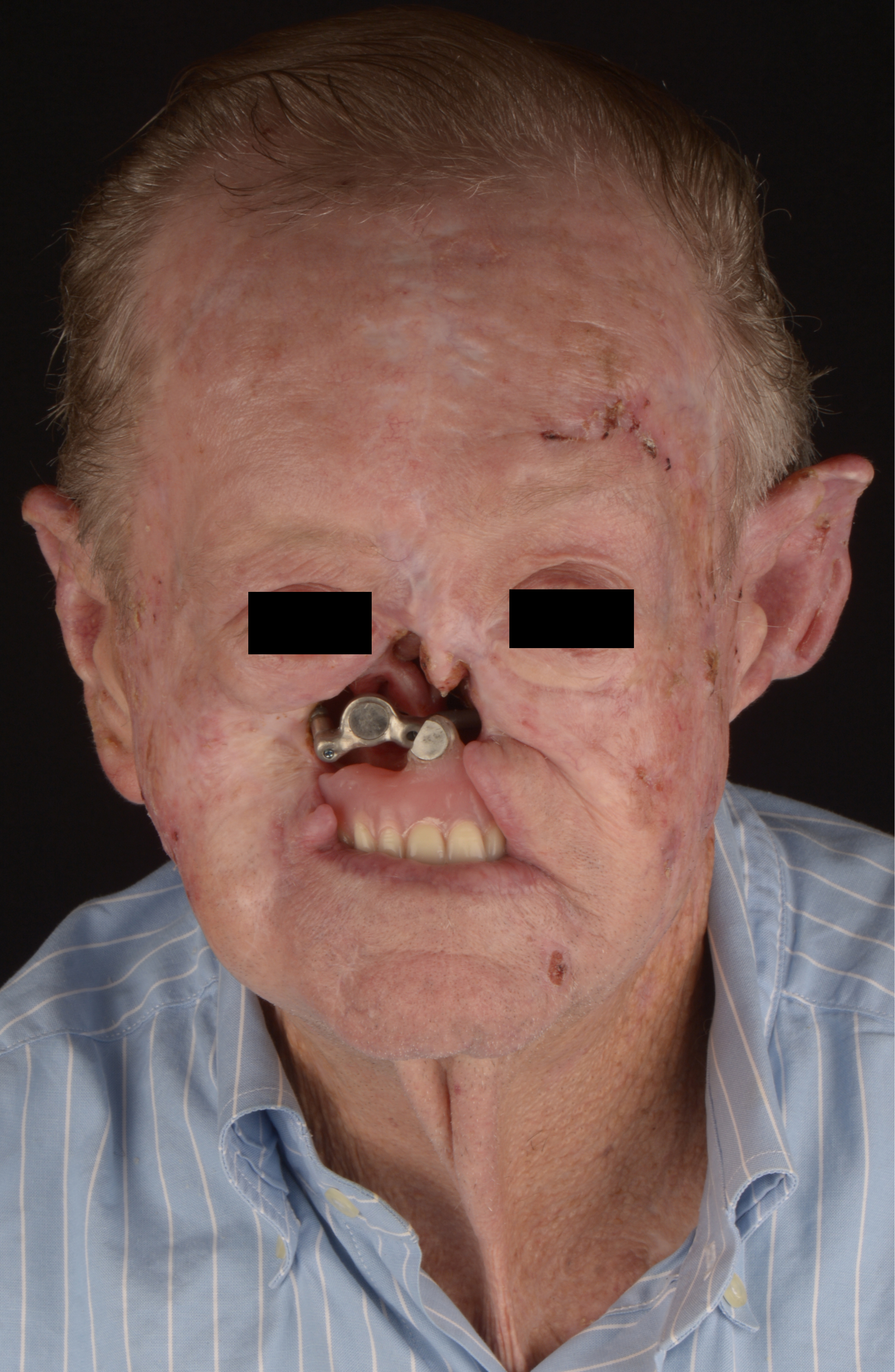 FIGURE 5. Postoperative frontal view with the upper complete denture in place with a magnet component attached to the anterior superior flange for the
nasal prosthesis. 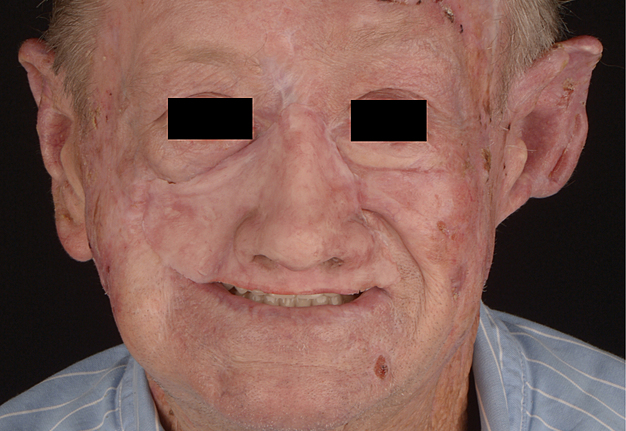 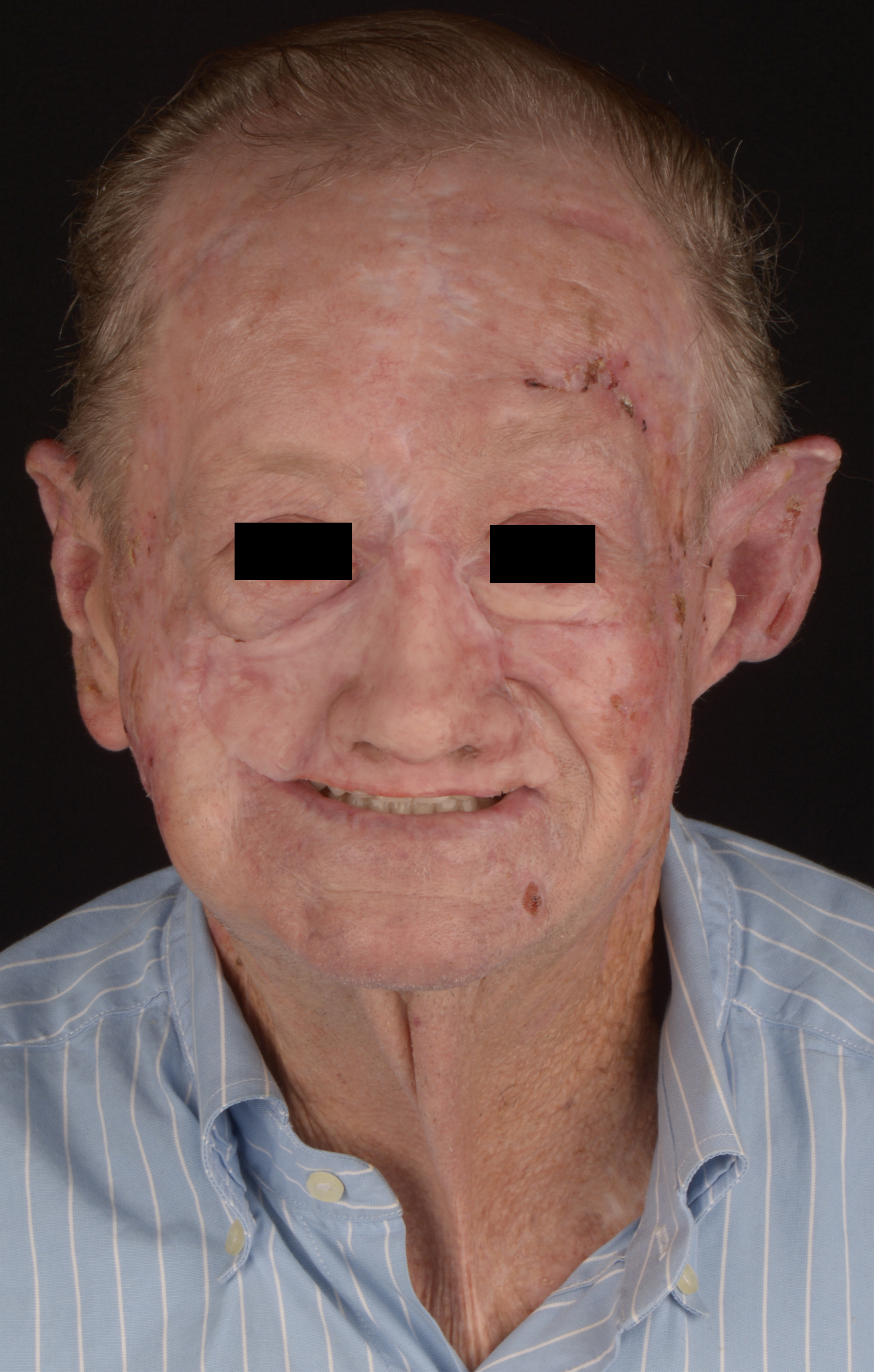 FIGURE 6. Frontal view with the final nasal prosthesis and complete dentures in place.

Total rhinectomy with extensive adjacent hard and soft tissue involvement can be a challengefor the reconstructive surgeon. In cases with malignant pathology, there is a risk for recurrence, and additional adjuvant radiotherapy may be indicated. Because of these factors, a horizontally oriented, zygomatic implant – retained maxillofacial prosthesis can optimize treatment, provide a superior cosmetic outcome and patient satisfaction compared to local or free flap reconstruction.

Although the risks for implant failure and infection exist, as well as the need for long-term prosthetic maintenance, the success rate of zygomatic implant-retained facial prosthesis remains high. 9–10

Furthermore, the area of the disease can be easily surveilled by the oncologic surgeon. In our case, we demonstrate the successful outcome of a zygomatic implant – retained nasal prosthesis in an edentulous patient with an extensive nasal defect involving the maxilla, right cheek, and upper lip.

While the proper retention of a conventional complete denture was not achievable in our patient due to the compromised anatomical structure at the anterior denture border, by applying an acrylic keeper to connect the magnetic components of the maxillary denture and nasal prosthesis together with the zygomatic implants, the retention of the maxillofacial prosthesis was optimized.

The patient was free of disease at the 15-month mark and very pleased with the intra and extraoral prostheses.

No conflict of interest.

This study did not receive any funding source.

ROLE OF CO-AUTHORS IN WRITING

All authors contributed equally to the concept and design of the study; writing, editing, and final review of the manuscript. The material collection and data processing was completed by the first author.

Consent was obtained by the patient in writing and verbally for publication of photos.