Foreign Body Retrograde Migration to the Intraglandular Duct of the Submandibular Gland with a Developing of Foreign Body-induced Sialolithiasis: Analysis of Ultrasonography, Surgery, and Literature Published during Last 124 Years

We present a unique case of a vegetal foreign body retrograde migration to the intraglandular duct of the submandibular gland with a developing of foreign body-induced sialolithiasis in a 61-year-old woman. Analysis of ultrasound examination and operation are performed.

Our foreign body`s case represents an intermediate stage of complete sialolith formation around the foreign body nidus (synonym: scaffold). The paper summarizes the analysis of 28 cases with foreign body-induced sialoliths (27 cases from literature and a case of our team).

Literature review which was based on the studies published during the last 124 years gave a possibility to classify the development of the ‘foreign body-induced sialolithiasis’ in 4 consecutive stages. Our case of the foreign body-induced sialolithiasis represents a second stage of this pathologic process when nidus is partially covered by calcifications.

Obstructive sialadenitis caused by the foreign body intrusion into the duct of the gland can have an acute and chronic clinical course or exacerbation of a chronic form. 1 Incredibly different foreign bodies
inside the Wharton`s ducts have been found and reported. Fingernail, 2 vegetal nidus, 3 thorn, 4 piece of hair, 5 fish bone, 6,7 metal body, 8 and other particles are published as foreign bodies of the submandibular gland duct which caused obstructive sialadenitis. In some foreign body cases, for example a fish bone, it was connecting several sialoliths. 6 Study of Xie et al 7 presented 13 patients which had fish bone nidus inside the sialoliths (synonyms: concrements, 9,1 salivary stones, calculi 1,10 ).

All those reports proved one of the sialolithiasis theories, which describe a foreign body-induced sialolith formation. Despite the fact that in some cases the foreign bodies’ are localized in the anterior/middle part of the duct, its migration to the intraglandular duct system is also possible and should be analyzed.

Retrograde passage of different foreign bodies into/inside the Wharton duct described in the recent publications: a 2.0 cm long barb-like metal body (which located at the posterior part of the Wharton`s duct) 8 and 3.5 cm long wooden splinter 11 .

The purpose of our report is to present a unique case of a vegetal foreign body retrograde migration to the intraglandular duct of the submandibular gland with a developing of foreign body-induced
sialolithiasis. Analysis of ultrasound examination, operation, and literature review are also highlighted. Our foreign body`s case represents an intermediate stage of forming a complete sialolith around the
foreign body nidus.

A 61-year-old Caucasian woman was referred to the Center of Maxillofacial Surgery and Dentistry with 4-day complaints: salivary colics and tissues enlargement in the area of right submandibular gland. Bimanual palpation revealed enlarged, firm and painful right submandibular gland. Upon the intraoral examination clear saliva milked from the orifices of both Whartons` ducts. Sublingual mucosa also showed no signs of inflammation. 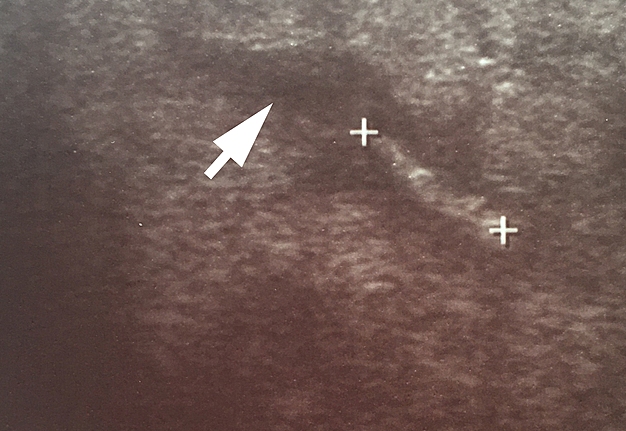 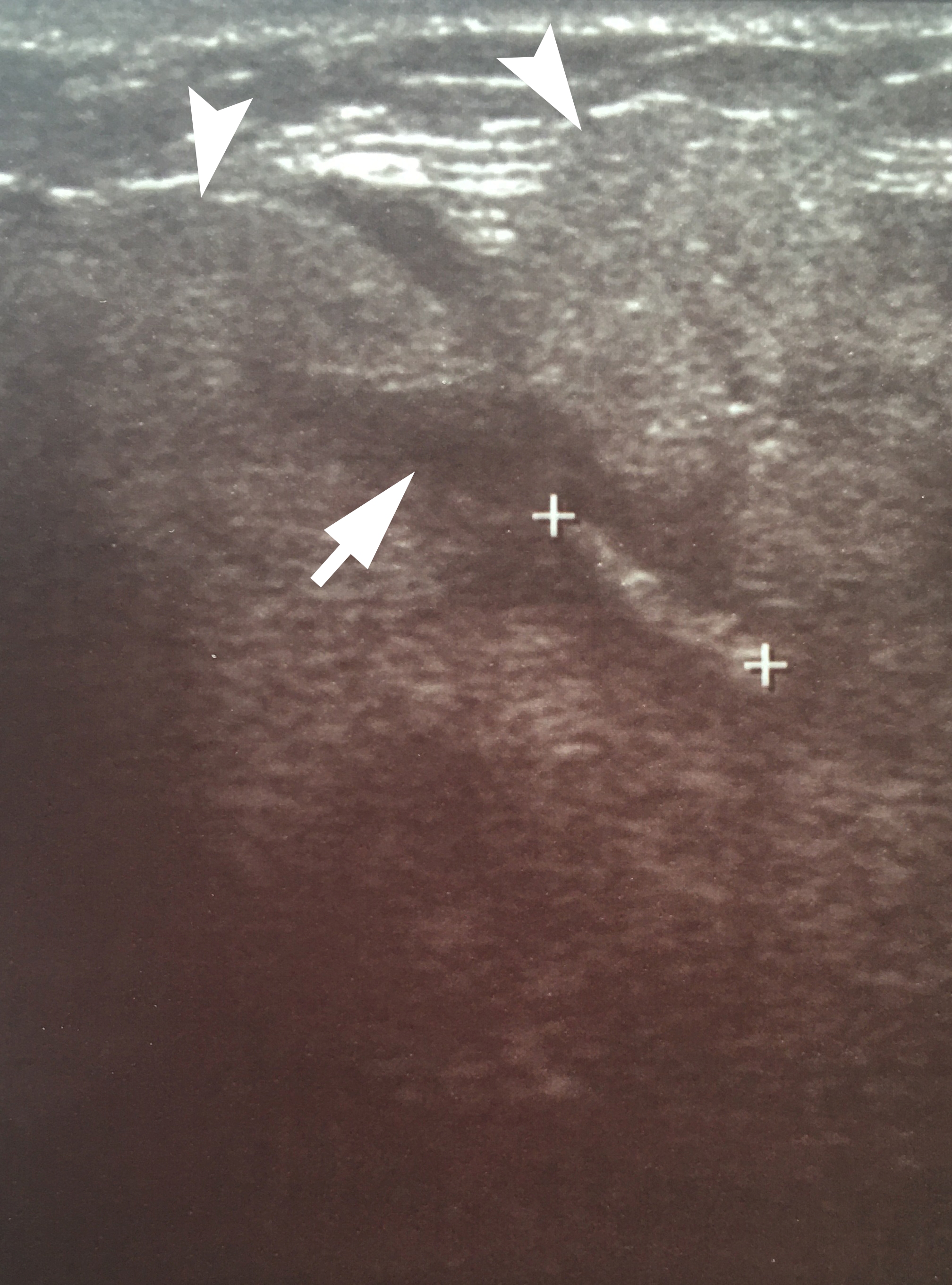 Under the local anesthesia, a ductotomy in the posterior part of the right Wharton`s duct was performed and the foreign body was extracted. After removal, the foreign body undergone precise investigation by a surgeon (Oleksandr Nozhenko) which revealed a 0.8-cm long green vegetal nidus (looked like a stem of a plant) with a multiple areas of attached calcifications (Fig 2).

Intramuscular injections of ceftriaxone 1g × 2 times per day and intraoral probiotics were prescribed simultaneously with rinsing by antiseptic solution during next 5 days after surgery. Post-operative period was smooth (i.e., uneventful recovery). 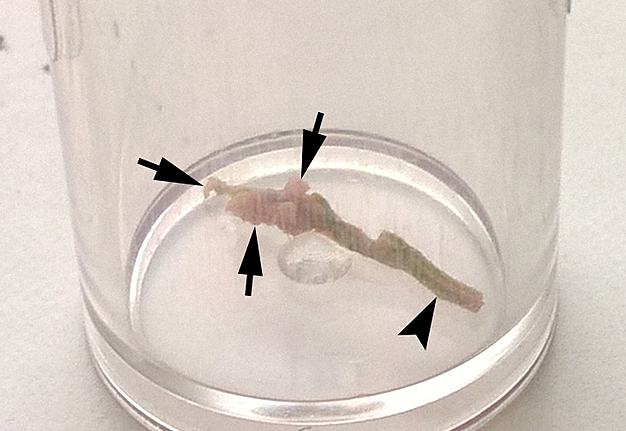 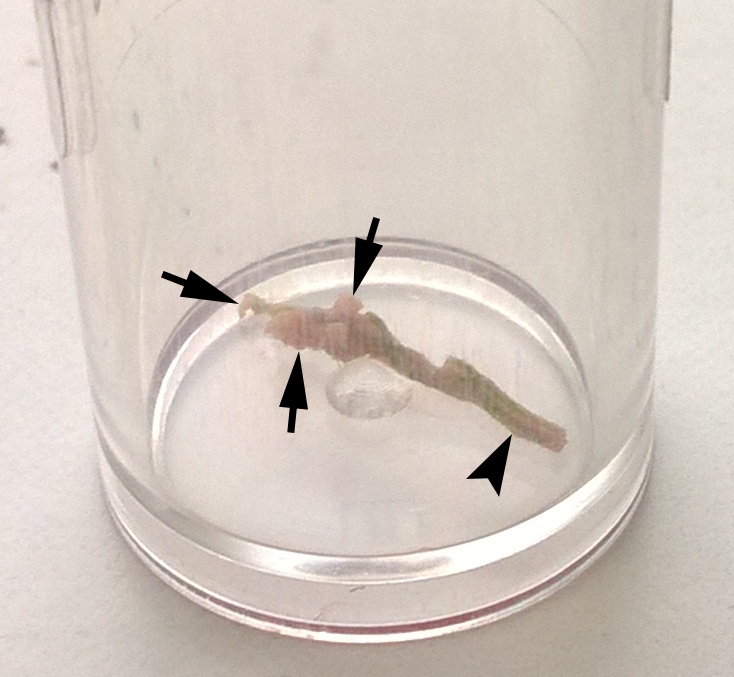 FIGURE 2A. A magnified view from different sides (A, B). A 0.8-cm long green vegetal nidus (arrowhead) with a rough surface and multiple areas of attached calcifications (arrows). 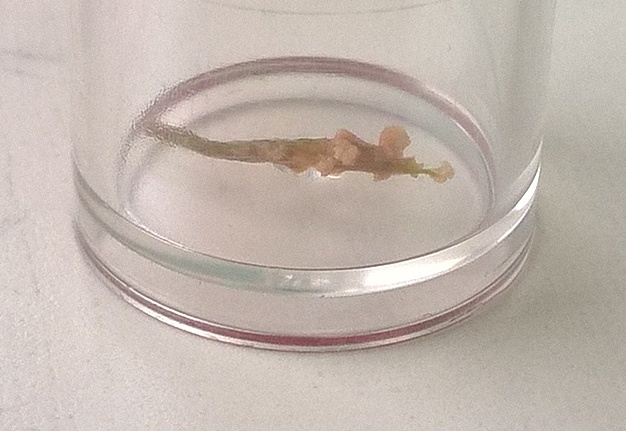 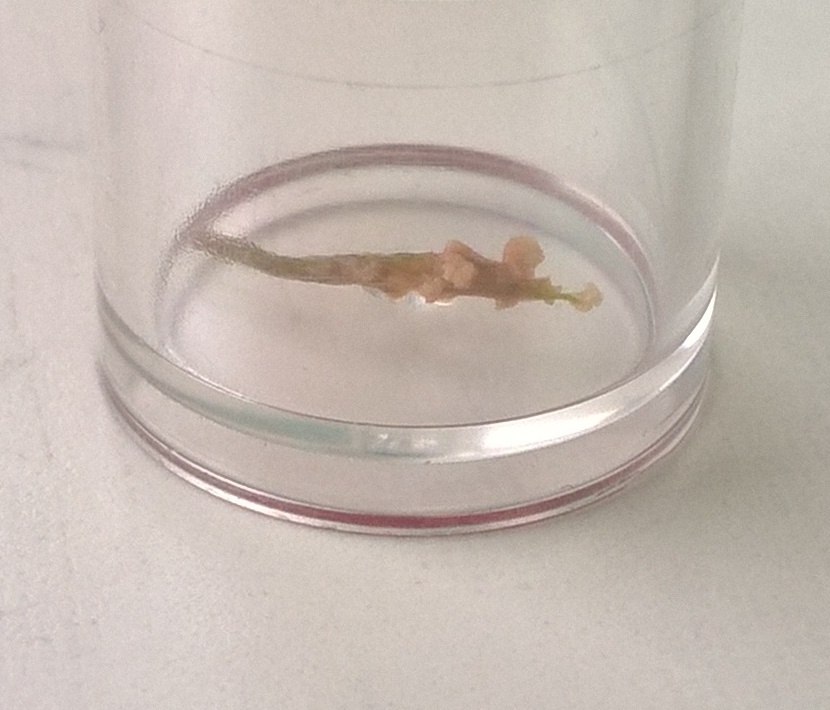 FIGURE 2B. Foreign body after removal: A magnified view from different sides (A, B).

Mechanical blockage of the ductal system and stasis of salivation describes the development of obstructive sialadenitis. If the foreign body intrusion was unrecognized by the patient and does not
immediately cause complaints in a patient or patient received symptomatic treatment, the foreign body prolonged intraductal stay potentially can provoke formation of attached calcification around the foreign body`s nidus and develop of foreign body-induced sialolithiasis.

Case studies indicate that foreign bodies can also penetrate parotid gland ducts without 12 or with development of foreign body-induced sialolith 13 .

In contrary to smooth surface-foreign bodies, the bodies with irregular surface, like particles of the plants and fish bones, are more likely to transform into sialoliths.

Some of the particles originated from human body, like fingernail 2,14 and hair 5,15 . Others were intruded upon eating the food, like fish bones. 6,7,16-18

And a lot of foreign bodies of completely unexpected origin like metal wire 19 , blade of grass 20 or thorn 4 .

A thorough study of Loring W. Pratt showed the fundamental analysis of 15 literature sources from 1897 to 1968. 10 Which revealed, among more than 37 cases with foreign bodies of the Wharton`s duct 10 , two patients with foreign bodies covered by calcifications 21,22 . The oldest article reached the year 1897 when was reported a patient with sialitis (an old name of “sialadenitis”) induced by a blade of grass without a stone formation. 23

Reported, that foreign bodies can lead to the immediate insignificant complaints (the patients can feel an injection under the tongue at the moment of foreign body intrusion), 1 and continue to behave as a “silent foreign body” 4 even up to 12 months.

In some cases even a 3.5 cm long thin wooden splinter can migrate to the posterior part of the Wharton`s with signs of obstructive sialadenitis but without sialolith formation around foreign body even after the 18 months of complaints. 11 In other cases a prolonged foreign body intraductal stay can lead to the development of foreign body-induced sialolithiasis. As during the period of an intraductal localization of some foreign bodies with a rough surface, the salivary stones are formed by the precipitation of calcified structures around a foreign body-nucleus. We agreed with opinion of Derin et al 18 who used another term for nidus – a scaffold. They describe intraductal fishbone which served as a scaffold for sialolth. 18

In our opinion, a foreign body-induced sialolith formation is a more threatening condition for the course of obstructive sialadenitis. Because of a foreign body`s volume increases due to the permanent precipitation of calcified structures around it. This act provokes even severe blockage of the gland and stasis of the saliva. What also accelerate degenerative changes of the glandular tissue and increase the risk of exacerbation of the chronic obstructive sialadenitis.

To the table were gathered the cases which were published during last 124 years presenting the foreign body-induced sialolithiasis of the submandibular glands. The table was compiled based on our literature search and analysis of Loring W. Pratt, M.D. for the 1897-1968 period.

The hair is perfectly described in 2009`s sialoendoscopy report as a cause of obstructive sialadenitis of the submandibular gland. 5 In 2014 the first case study presented a facial hair which served as a nidus for ~6-mm salivary stone formation. 15

The same situation is with metallic foreign bodies. In some cases they are founded as a cause of obstructive sialadenitis without signs of sialolith formation, 8 in others – sialolith forms around a metal wire 19 or shrapnel 25 .

We supported the opinion of Sreetharan and Philip – ultrasound investigation may be a very good first line diagnostic modality. 12 Upon ultrasonography sialoliths is usually visualized as hyperechoic semilunar bodies with an artifact of acoustic shadowing. Mucous plugs at ultrasound presented as a round shape isoechoic intraductal bodies without acoustic shadowing. 26

2017`s retrospective study of 659 salivary glands (486 submandibular and 173 parotid) revealed that sensitivity is of 94.7% and specificity of 97.4% for sonography in the patients with sialolithiasis. 9

In our case the foreign body visualized as hyperechoic linear structure and the artifact of acoustic shadowing was not noted due to the partial calcifications around the vegetal nidus.

Summarizing the analysis of the published cases, the foreign body-induced sialolithiasis goes through 4 consecutive stages:

1. Calcium incrustations into foreign body (incrustations are visible only microscopically). 24
2. Partially covered nidus (when calcifications are attached to different parts of the foreign body) (Fig 2). 15 It can be considered as intermediate stage of sialolith formation.
3. Fully covered nidus (when cortex of calcifications covers the nidus from all sides).
4. Growth of sialolith`s cortex (this stage is pointed out based on the different sizes of sialoliths with the same size nidus).

And our case clearly shows that it’s important to remember that those 4 stages should be distinguished. As upon the first stage, the organic foreign body can be completely invisible at X-ray/computed tomography (in case of vegetal origin of foreign body) or showed no acoustic shadowing upon ultrasound.

Conclusion of two possible ways of pathological process development after intrusion of foreign body into the Wharton`s duct is represented in Figure 3. 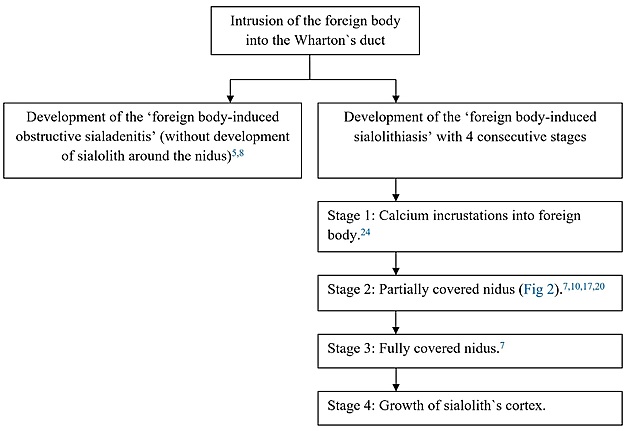 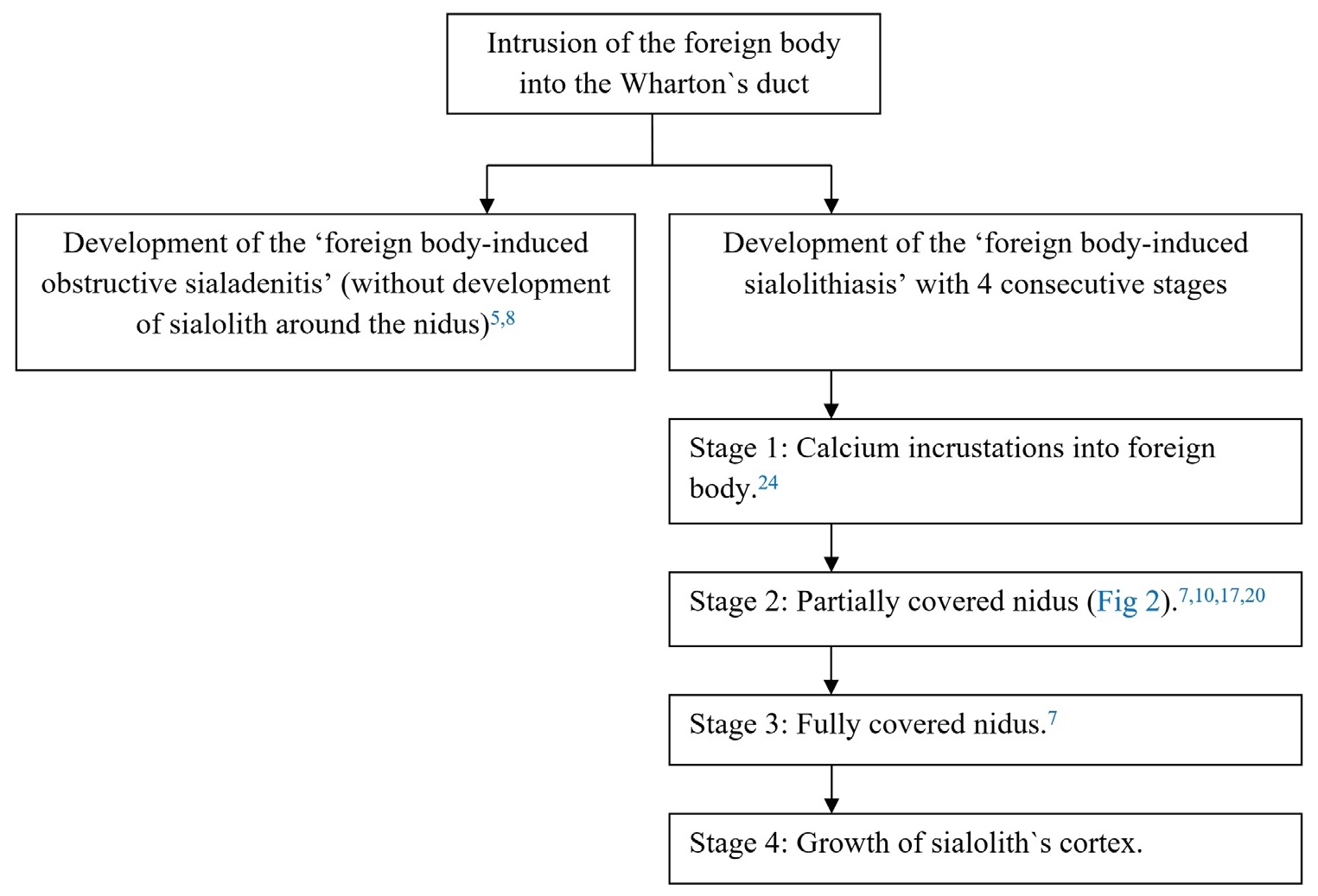 FIGURE 3. Flowchart displaying two possible ways of pathological process development inside the submandibular gland system after intrusion of the foreign body into the Wharton`s duct.

No funding was received for this study.